The Society has been serving the local community since it was formed in 1963. It is an independent body in membership of the national Abbeyfield Society and is a registered charity.

The idea of forming the Society stemmed from the Council of Social Services who built John Storer House (JSH). A group of seven members of the JSH team met Major Carr-Gomm, the founder of the Abbeyfield Society. Major Carr-Gomm explained the scheme and arranged an initial grant of £500.00 from the Smith’s Charity.  A small committee was formed to proceed, and the Society was incorporated on the 25th March 1963, and held its first meeting on the 30th April 1963.

Originally, all the committee members running the Society were volunteers.  Mr. Bram Sharpe was elected Chairman and Miss May Mills as Honorary Organising Secretary.  Miss Mills acted until 1969 after which it was decided to make the role a part-time salaried post.  She later became a Regional Chairman of the national Abbeyfield Society. In 1969 Mrs Joan Hammond was appointed to the new post. Although a paid official, she regarded her job as a vocation and devoted her whole efforts to the Society.

In 1964 two houses were purchased: 45 Toothill Road and 59 Forest Road, the idea being to have houses in different parts of the town. At that time, these houses were referred to as Supportive Care Houses

The next expansion was the purchase of 11 and 12 Park Street in 1967.  Councillor John Rodgers was Mayor of Loughborough and made it the object of his Appeal.  He raised a substantial amount and the balance of £8,000 was granted as a mortgage by the Borough Council. 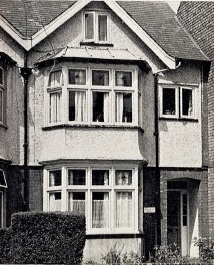 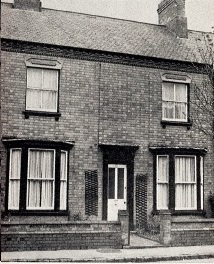 For some time, those running the Society had been concerned that some residents needed more care than the Supportive Care scheme provided, and, in response, it was decided to provide an Extra Care Wing at our Victoria Street house.  This was opened on the 9th March 1974.

The demand for Supportive Care Houses continued and between 1974 and 1976 nos. 7 and 8 Park Street were bought and adapted. In addition, in 1976 Miss Angela Faire died and left her house, Ingleside, 190 Ashby Road to the Society, a most wonderful bequest. The house was opened to residents in September 1978.

Ingleside also had a large garden running down to Westfield Drive and, in due course, this meant that adequate land was available for building Westfield House.

Over time, it became apparent that the Extra Care Wing at Victoria Street was no longer large enough, nor were its facilities good enough. So, the ambitious project to build a purpose designed 21-bed residential home on part of the land of Ingleside was launched. Westfield House received its first residents in September 1990, and it was formally opened by the National President of the Abbeyfield Society, the Duke of Westminster, on the 20th June 1991. With the Extra Care residents transferred to Westfield House, Victoria Street could be refurbished and was re-opened in December 1991.

Westfield House as it is today.

Demand for Supportive Care accommodation had also been declining, making it difficult to find new residents for 45 Toothill Road. Sadly, the decision was taken to close this house in1991.

On the 1st April 1993 the Government introduced the new Community Care Act which encouraged elderly people to be cared for more in their own homes.  This resulted in less referrals into what was now referred to as Sheltered Housing (previously Supportive Care Housing), creating many vacancies throughout the Society. At the same time, demand for rooms with ensuite facilities was growing and the combined effect of these changes resulted in the sale of 7/8 Park Street in September 1995.

In February 1996, the house at 59 Forest Road was extended to accommodate 13 Residents, with all rooms having an ensuite facility. The house was refurbished throughout, providing residents with many aids and adaptations. At this time, it was also named May Mills House.

In April 1997, 11/12 Park Street was closed, and the residents moved into May Mills House.

Demand for Sheltered Housing continued to fall, so it was decided to close the Victoria Street house in March 2011.

In the ensuing years, a shift was seen in the needs of the elderly. The demand for Sheltered Housing continued to fall, and the residential care provision at Westfield House was adapted to meet the needs of those with dementia. The demand for dementia care continues to increase, and planning permission has been obtained to demolish Ingleside and build an additional dementia care facility on the site. Ingleside closed in November 2018 and work began on the new facility, Ingleside House, on 25 January 2021 with the aim for it to be open in the summer of 2022.

Since 1963 the Society has evolved in response to the changing needs of its residents, the community, and regulations. As a Charity and a not-for-profit organisation, the enduring aim throughout has been to reinvest in our houses, staff, and volunteers to ensure that residents are comfortable, safe, and happy. Caring and hard-working volunteers continue to be a valued part of the organisation in a range of activities, whether they be members of the Board of Trustees or befriending the residents.

Find out more about Abbeyfield

Learn more
We use cookies on our website to give you the most relevant experience by remembering your preferences and repeat visits. By clicking “Accept All”, you consent to the use of ALL the cookies. However, you may visit "Cookie Settings" to provide a controlled consent.
Cookie SettingsAccept All
Manage consent

This website uses cookies to improve your experience while you navigate through the website. Out of these, the cookies that are categorized as necessary are stored on your browser as they are essential for the working of basic functionalities of the website. We also use third-party cookies that help us analyze and understand how you use this website. These cookies will be stored in your browser only with your consent. You also have the option to opt-out of these cookies. But opting out of some of these cookies may affect your browsing experience.
Necessary Always Enabled
Necessary cookies are absolutely essential for the website to function properly. These cookies ensure basic functionalities and security features of the website, anonymously.
Functional
Functional cookies help to perform certain functionalities like sharing the content of the website on social media platforms, collect feedbacks, and other third-party features.
Performance
Performance cookies are used to understand and analyze the key performance indexes of the website which helps in delivering a better user experience for the visitors.
Analytics
Analytical cookies are used to understand how visitors interact with the website. These cookies help provide information on metrics the number of visitors, bounce rate, traffic source, etc.
Advertisement
Advertisement cookies are used to provide visitors with relevant ads and marketing campaigns. These cookies track visitors across websites and collect information to provide customized ads.
Others
Other uncategorized cookies are those that are being analyzed and have not been classified into a category as yet.
SAVE & ACCEPT